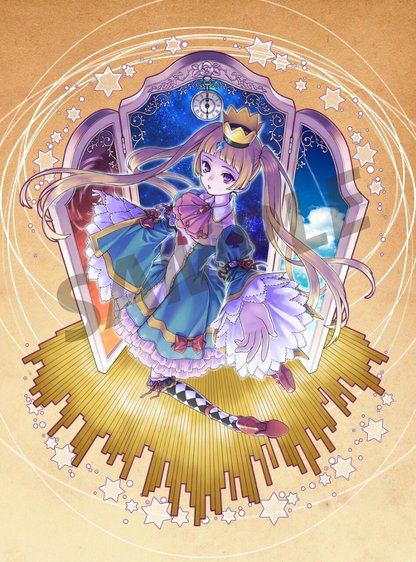 October 31st is a big day for 07th Expansion! It marks the launch of both Rose Guns Days - The Best and the long awaited TRianThology: Sanmenkyou no Kuni no Alice!

Rose Guns Days - The Best is a re-release of Rose Guns Days - Last Season, which includes a new short story. Last Season includes all content from the three previous seasons, making ‘The Best’ the definitive release of Rose Guns Days to date. If you haven’t picked it up yet, now might be a great time! The story takes place in an alternate history after World War II, where China and America take control of the country, setting the stage for a jazzy crime story adopting a blend of eastern and western influences. Rokkenjima’s community gives it their full recommendation! Rose Guns Days - Last Season even has a complete English fan translation by The Witch Hunt, which forumer soggysadboi has confirmed works with this release!

TRianThology is a new title from the three authors of VisualArt’s/Key’s Rewrite. The story begins with the character Alice conversing with her friend/slave Usagi in a strange dimension floating in the sky of a city. Alice complains that she is desperate to overcome the poison known as boredom, and discovers three Kakera, each containing a different world, or in Alice’s words, ‘something like a video game or manga’. The story of TRianThology like all other 07th works follows a linear progression, as we watch Alice observing each of these three stories bit by bit, jumping between them as she sees fit. The three Kakera are presented as unique visual novels: the psychological drama “Country Gal”, the upbeat self-explanatory “High School Romance Adventure” and the sci-fi action/thriller “Vespio 2438”. It remains to be seen what might connect these three distinct stories, but the existence of Alice is bound to spice things up. We’re as eager to know more about this story as you guys are!

If you’re curious about TRianThology, a Free Trial was published a couple of days ago which you can download right now! There’s even a patch if you care about a bringing your save files over from the trial to the full game. Obviously TRianThology is entirely in Japanese, but with the help of apps like Chiitrans Lite, even people with no knowledge of the Japanese language should be able to feel their way around while we wait for an English translation. The title shows a lot of promise, with by far the most visually impressive presentation of any 07th Expansion work to date with its abundance of animated backgrounds and its dynamic use of sprites and text boxes. If you’re reading TRianThology and would like to share your thoughts, or if you’re just curious and wanna know what people are thinking of it, be sure to hit up our TRianThology General Discussion topic on the forum! Oh, and if you were wondering why it’s capitalised like that, ‘TRT’ are the initials of its three writers!

These titles have turned out to be a little bit difficult to find, as forumer Rabla set out to hunt down these two all around Akihabara in Tokyo, but didn’t end up finding one until the day after release, hidden in a pile at the back of Melonbooks. That said, the majority of our readers don’t live in Japan, and thankfully they are pretty easy to find online. These Japanese retailers are known to stock 07th Expansion titles, so they’ll be your first choice if you live in Japan. For the rest of us, you’ll be happy to know that Japanese hobby distributor Amiami currently has both titles in stock, and they ship all around the world! But you’ll have to be quick, as they’re bound to sell out eventually! You can purchase them both on AmiAmi at the links below:

Today’s a big day for 07th Expansion fans, and we at Rokkenjima can’t wait to finally sink our fangs into - er, graciously take the time to appreciate TRianThology’s story. If you happen to read through and finish TRianThology, we’d love to have a chat with you, and maybe even allow you to write a review for this blog if you’re interested!

So, will you be picking up either of these titles? Let us know below!