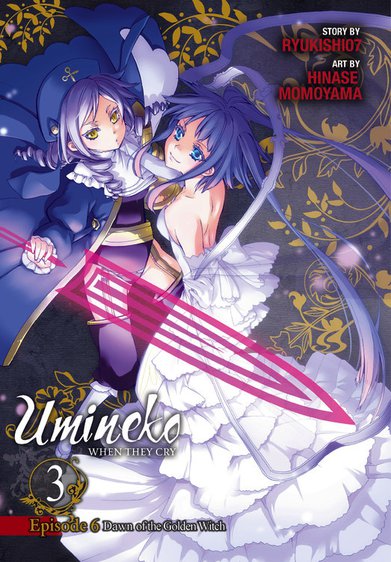 The 24th of January 2017 marks the release of the latest volume in Yen Press’s English localisation of the Umineko When They Cry manga! This marks the 15th volume of the Umineko Manga released in English, and concludes Episode 6: Dawn of the Golden Witch. Only one more quarter of the Umineko story remains to be told! Episode 6 features art by Hinase Momoyama who illustrated Higurashi Ch. 7 Minagoroshi, as well as the Root Double manga. This volume stands at a whooping 624 pages long; enough to seriously hurt if you whacked someone over the head with it. The blurb reads:

So confident was Battler in the game he had orchestrated that he allowed his opponent, Erika, the use of her precious tape. Immediately, Erika set to work creating three perfectly sealed rooms - seemingly guaranteeing Battler’s downfall. Trapped in a logic error, Battler maneuvers deftly around Erika’s obstacles, impressing even Lady Lambdadelta. But there are no lengths to which Erika would not go in order to secure victory…

You can purchase this volume in paperback or digital for a RRP of $20.00 USD from numerous retailers listed here including Amazon, Barnes & Noble, Google Play, as well as my personal choice for international shipping The Book Depository. It is unclear whether or not Requiem and Twilight have been acquired for distribution yet, but we’ll let you know as soon as we do.

And while on the topic, now would be an excellent time to personally thank Yen Press for their hard work localising the When They Cry manga series’ over the last nine years. If you didn’t hear, we are currently dedicating this week to showing our appreciation to everyone responsible for bringing When They Cry to English-speaking audiences. So please buy the manga, and join the chorus on Twitter and Tumblr under the hashtag #ThanksForWTC and show Yen Press some love! You can find them here on Twitter and here on Tumblr. They deserve the praise, and any extra encouragement will help ensure that Requiem and Twilight are released soon, so don’t be shy!

If you’ve already picked this volume up, please let us know in the discussion below!